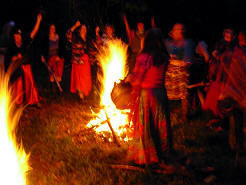 The Celtic tribes of Northern Europe experienced the cycle of the natural  year as a great wheel in which they  celebrated eight Gate-ways.  These eight Gateways are  turning points  in both the natural and the tribal year: — points at which Celtic peoples shifted the focus of their human activity in harmony with the changing seasons. Traces of these celebrations reach back far into our prehistory.  They  are deeply embedded  in the indigenous Celtic cultures of these regions,  sometimes preserved, sometimes buried by the overlays of later traditions,  and by the arrival of more clock-driven, more profit driven, and increasingly more urban forms of culture. Our work in Celtic Tantra is to re-connect with the natural rhythm of the seasons,  to re-experience our own, human, sexual dance as a pattern woven deeply and subtly from the natural rhythms that nurture us, and to celebrate the healing, the creativity, and the deep pleasure that arises in reconnecting with our heritage. 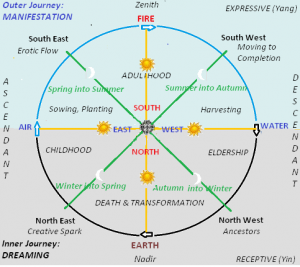 Four of the Celtic festivals are “solar” festivals —  they mark out the cardinal quarters of the year, which are determined by the relation between the Sun and the Earth.  These are the two Equinoxes and the two Solstices. Equinoxes mark the points where the light and dark are in balance.  Solstices mark the points of greatest imbalance between light and dark, which are also, of course, the points at which the year, like a pendulum, is poised to swing back towards balance again.   They are called “solar” because their dates are fixed astronomically by the position of the Sun relative to the earth’s tilt.  As solar festivals, they are also associated with the yang masculine — with the overarching determining power that maintains the ordered frame of things — equivalent to the position Shiva occupies in  Hindu tradition.  The solar Gateways specifically identify a single moment in the Celtic Year when the  sun is at a single point in its career.

The other four festivals are lunar, and are at the cross-quarters of the year– Samhain, Imbolc, Beltane and Lammas (the names differ a little in different areas of Celtic settlement). These Gateways anticipate the whole season that follows.  These actual lunar gateways are particularly associated with the alchemical and tidal forces go 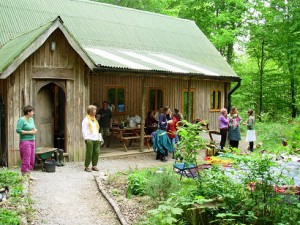 verned by the Moon — subtle and profound inner changes, which herald the year’s morphing into a new season, the deep shifts which accompany one season dissolving, another emerging… These are forces associated with the energy that dissolves form, with the unconscious rather than the conscious, and with the powerful rhythms of fertility and gestation, maturation, degeneration and death. If in traditional Celtic cosmology the Sun is the Earth’s great Father, the equivalent of Shiva, the Moon is its Mother, the equivalent of Shakti (but also of Kali) in Hindu tradition.

The landscapes we work in for our Celtic Tantra workshops, and the human community we all create there, together provide a powerful environment in which to step through these Gateways. In this process it is possible to find transformative pleasure, inner healing, and attunement, both in relation to our own dance together as a human community, and in relation to our dance with the natural world that nurtures us.